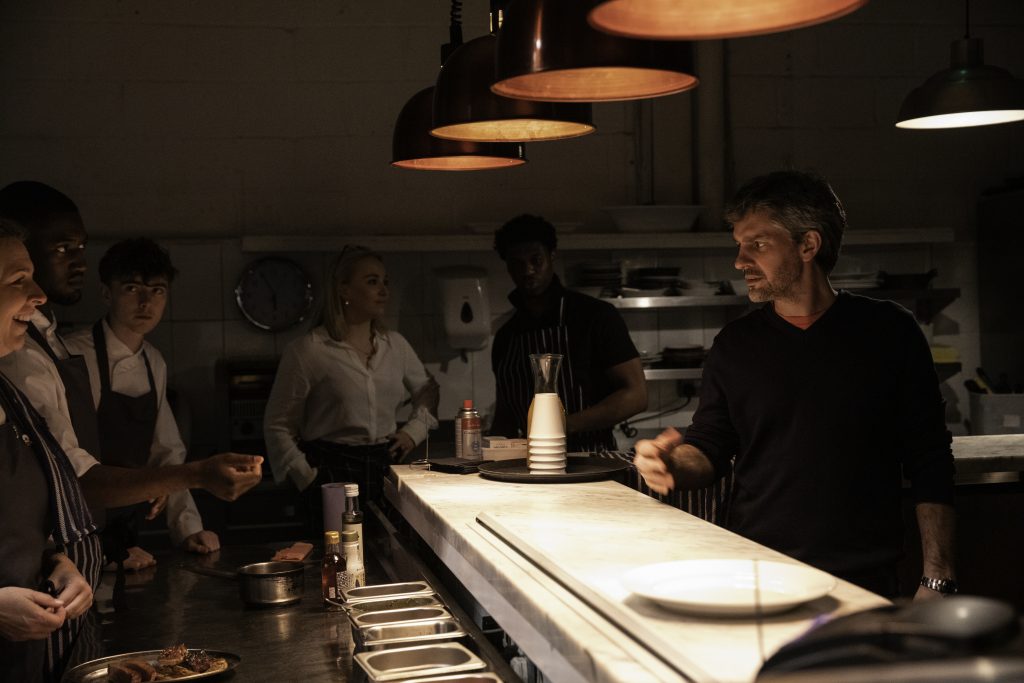 One of the most in-demand and respected names on British TV and a regular supporting star in major Hollywood titles (including ‘The Irishman,’ ‘Pirates of the Caribbean’ and ‘Venom: Let There Be Carnage’), Graham has now made the transition to film leading man with an audacious one-shot drama, and has a BAFTA nomination to show for it.

Taken from the original article by The Hollywood Reporter March 2022

During a recent trip to the gym, Stephen Graham was approached by a fan with a rather unorthodox line of praise.

“He came up to me and said, ‘Seriously, there’s some real shit on the telly but as soon as I see your face I know it’s going to be good,’” the British actor — who was overjoyed with the comment — explains to The Hollywood Reporter.

Unconventional or not, this note of approval almost perfectly surmises the status Graham now has on home soil: that of a universally well-trusted flagbearer for TV excellence.

In the last two years alone he’s starred in some of the U.K.’s most critically-acclaimed shows, including the Jack Thorne-penned Help alongside Jodie Comer, Jimmy McGovern’s three-part prison drama Time, crime series White House Farm and Arctic thriller The North Water (part of an all-star cast including Colin Farrell). But these latest titles are just the tip of a career iceberg that have hit several high-notes across three decades, most notably Shane Meadow’s gritty masterpiece This is England (2006), featuring Graham’s breakout role, playing a violent skinhead fascist, and its three mini-series follow-ups, plus scene-stealing appearances in hit dramas such as Line of Duty.
In the U.S., however, Graham’s short but well-built figure has become a frequent sighting on the big screen, but mostly just behind the A-listers. Gangs of New York and The Irishman mark two Martin Scorsese collaborations (HBO’s Boardwalk Empire, in which Graham plays Al Capone, and which Scorsese executive produced, makes it three), while other credits include Snatch, Rocketman, Pirates of the Caribbean (both On Stranger Tides and Dead Men Tell No Tales), Greyhound and last year’s superhero hit Venom: Let There Be Carnage. His Pirates co-star Johnny Depp described him as “one of the finest English actors of his generation.”

Given such high esteem and high demand from the industry, it feels almost ridiculous that Graham has only just now followed up on his four BAFTA TV nominations (for Accused, This is England ’90, Save Me and The Virtues) with recognition from the British Academy’s more illustrious, film-loving big brother. But even he notes that Boiling Point, Philip Barantini’s one-shot kitchen drama — in which he plays the talented but troubled head chef in a bustling London restaurant and is now nominated for best leading actor — marks something of a turning point.

“I’ve been very fortunate to have been in some great films, with some nice little support roles,” he says. “But I suppose, looking at it from a distance, this was a real opportunity, not to be sounding egotistical in any way, shape or form, for me to have a bigger platform to show my capabilities, and be given more to do.”

When Barantini asked him to star as a boxing coach in his 2019 debut short Seconds Out, Graham turned him down. But he agreed to take a look at the finished film, telling the actor-turned-director: “If you do a good job, I’ll help you with your next one.” The follow-up was a short version of Boiling Point. Made in the just three days — all the time Graham had agreed to give — the intense 20-minute one-shot drama, loosely based on Barantini’s own stressful experiences working in restaurant kitchens, ended up getting a British Independent Film Award nomination for best British short. Barantini got the backing for a feature-length version and Graham returned to reprise and expand his role as head chef Andy over one chaotic and exhausting night, also told in real time in just one shot.

For Graham, making the full-length Boiling Point was “the same, just on a bigger scale.” And for the doubters, he swears on “everything that I hold dear in my life” that all 92 minutes were filmed in one continuous take, and didn’t utilize clever editing trickery (as seen in 1917 and Birdman). “I think we were actually the first British feature film to do one-take in its entirety from start to finish,” he says.

The Boiling Point feature — which led the 2021 BIFA nominees alongside Kenneth Branagh’s Belfast with 10 nods, eventually winning four — also marks the first project out of the blocks for Matriarch Productions, the newly-launched company Graham set up with his wife, the actress Hannah Walters (who also stars as the film’s maternal pastry chef, Emily). The two have been close collaborators and co-stars across numerous films and shows (as she corrects him in the background of this interview, he refers to her as “the boss”) and established Matriarch — run from their family home in Leicestershire in central England — to give a platform to traditionally underrepresented voices and stories.

Both Graham and Walters served as exec producers on Boiling Point, and Graham says they were deeply involved in everything from casting (the impressive ensemble also includes Vinette Robinson, Malachi Kirby and Ray Panthaki) to setting up the production with their own egalitarian ethos and philosophy.

“I’ve turned up on set before and I’d be like number 63 on the call sheet,” he says. “So it was my idea to not have numbers on ours. There’s usually this hierarchy, but I was like ‘no numbers.’ Because to me, each and every one of the people involved is an integral piece of the jigsaw. And without that person, we don’t get the film.”

Graham does admit that, despite the numberless call sheet process helping “everyone feel a part” of the shoot, his approach did make life “very difficult for the ADs (Assistant Directors).”

Boiling Point has underlined the desire, both from Graham and much of the British industry, for him to take on more leading film roles. But he says Matriarch’s next two projects are for TV.

“Matriarch’s in a really lovely position,” he notes.

Unlike much of the U.K.’s acting elite, Graham’s upbringing wasn’t awash in privilege and expensive private schools. Born near Liverpool in northern England (he still has a thick Liverpool accent) and brought up by his social worker mother and mechanic-turned-nurse step-father, he’s spoken in the past about suffering from “imposter syndrome” due to his working-class background.

Discussing Matriarch’s recent success, Graham reflects on a “moment of sentimentality” he had on seeing a working draft schedule for a big TV series the company is putting into production next year, a sheet that Walters had stuck on the wall behind their computer and was filled with dates for the writers’ rooms and script notes.

“It was like, oh look at us, two little kids from council estates, and look what we’ve managed to do.”

But it’s these humble origins that have helped turn Graham into the icon he is today. And he’s managed to achieve such success — at home and abroad —without turning his back on either his roots or the U.K.

Despite getting a somewhat gourmet early taste of Hollywood in 2002’s Gangs of New York (playing the gang leader Shang) and making numerous work trips stateside since, he claims he’s never considered moving to L.A.

“I’m a home bird,” he says. “Sunday morning’s about being at home, going to the park with the kids. For me, it’s the best of both worlds. And we just never had the desire as a family.”

Working with British directors, such as Lewis Arnold, his director on Time (a show that also saw him and Walters star as husband and wife on screen for the first time), gives him “the same buzz and the same kind of joy” as collaborating with cinema legends like Scorsese, he says.

“When I was a kid, I just hoped to be able to make a living, because it’s such a precarious job,” he says. “So I love working at home and I love doing projects at home. This is the stuff I was brought on, shows such as [1982 BBC social realist drama] Boys from the Blackstuff and Alan Parker. And we have a wonderful industry here, with wonderful people.”

Graham continues to give others, particularly those from similar, working-class backgrounds, a helping hand entering the industry. When fellow Liverpudlian Jodie Comer tearfully accepted her TV BAFTA award for Killing Eve in 2019, she reserved her greatest thanks for Graham and his “generosity”. She’s since referred to him as her mentor.

Graham’s latest ascent from U.K. TV powerhouse to big screen leading man has fortuitously coincided with a newfound appreciation for local features from the upper echelons of industry, with British cinema having amassed a much greater share of the recognition than usual at this year’s BAFTA awards.

Alongside Boiling Point, which has four nominations (Graham’s nomination is joined by outstanding British film, outstanding debut by a British writer, director or producer, and best casting), other notable homegrown additions include Aleem Khan’s After Love, also with four, and Clio Barnard’s Ali & Ava, with two (including fellow film first-timer Adeel Akhtar, who goes up against Graham in the leading actor category). For the first time in years, the BAFTAs aren’t just a dry run for the Academy Awards, held two weeks later, but seem as much a celebration of U.K. talent.

“For the BAFTAs to acknowledge those films is important,” says Graham, who adds that it was independent, kitchen-sink British features such as Cathy Come Home, Scum, My Name is Joe, The Loneliness of the Long Distance Runner, Land and Freedom, and Saturday Night and Sunday Morning that really gave him the desire to act.

“I think it’s integral for [the BAFTAs] to have a sense of identity because in the past a lot of those films have been overlooked for those with bigger budgets and the American films. We should always be looking to create a platform and a vehicle for some of our independent films to show the quality and standard of what British filmmaking is all about, and what it’s always been about.”